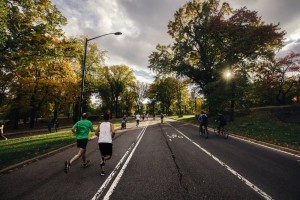 We had just had a record breaking snow storm.  Back in my competitive running days, I would have found a way to run in a storm like that.  I’m not sure whether it was a durable body or a reckless spirit that compelled me to do so, but I lack both of those things now, so my only workout that day came in the form of heavy snow and a shovel.

When I was done, I stood on the back patio for a few moments admiring the scene.  The snow was beautiful.  There was peace in the muffled silence, until I realized something was missing.  There were no boot prints or sledding paths in the snow.  My children had moved on.

It’s funny how our day-to-day routines shelter us from a life that’s constantly changing, until something stops us for a moment so we can take an inventory.  It’s not like I didn’t realize that they were getting older, but something in that moment made the fact more real.

I knew when they were born that my role as a father would be the most important of my life.  And yet, there didn’t seem to be any instructions to follow, so I pretty much learned along the way.  Making it even more difficult, there are no real ways to measure success.

Both of my children have grown to become good people, and some would use that as a barometer, but they, not I, deserve the credit for that.  Over the years, I’ve found that what I say to them has only a marginal effect.  It has been their experiences, and they’re reactions to those experiences, that have largely shaped them.

What I’ve finally come to realize is that my highest purpose as a father can be describe in rather simple terms – to set an example for my children to follow.  And, here is where running enters the story, and where I have the opportunity to share something of value with you.

Running has allowed me to do all those things.  As I’ve trained, overcome challenges and crossed finish lines, my children have watched me.  As I’ve found joy and passion on my runs, they have noticed.  In the process, they’ve learned more than they have from all the speeches, rules and punishments combined.  It’s not that those other things don’t have an important place, but you can’t guide your children with them if your own personal principles are misguided.

We all have a vision of what we’d like to become – a great athlete, a good parent, or simply a good person.  Whatever your vision might be, the principles of running – things like discipline, resilience and consistency – will serve you well.  And, if you should ever need a little extra motivation to practice these, let it come from the eyes that are watching and following your lead.

Dave Griffin is the Times’ running writer.  His column appears every other Sunday.  Reach him at dpgflyingfeet@aol.com or join the Facebook group, Dave Griffin On Running.